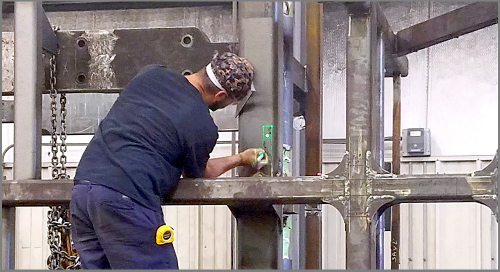 “We made a goal to drastically reduce welding rework in the assembly area, so that all the welding of individual component parts on our frames would be done in the frame shop during initial welding,” explains Joe Stark Vice, President of Operations and Production. “At that time, we were laying out each machine we built by hand using tape measures and soap stones. Our machine-to-machine consistency just wasn't where it needed to be, which meant too much rework having to be done in the main assembly areas. We knew we needed to develop some standardization and best practices to accomplish our goals.”

The Plasser team assessed the possibility of their engineering department creating models detailing every tab, bracket, plate, etc. The idea was rejected due to the tremendous amount of engineering time that would be necessary to keep the models 100% accurate.

Due to their production mix, using traditional fixturing and jigs wasn’t a viable option either.

“We are a low-run high-mix shop with more than a dozen models, each having multiple iterations as well as client requests for customization,” says Anthony Dozier, mechanical design engineer and mechanical liaison engineer at Plasser American. “It would be very difficult to get fixtures into some of these locations, and on some of our frames, there could be 400 – 500 little component pieces that have to be laid out based on that particular frame model and iteration. It would take an inordinate amount of fixturing to locate those parts each time.” 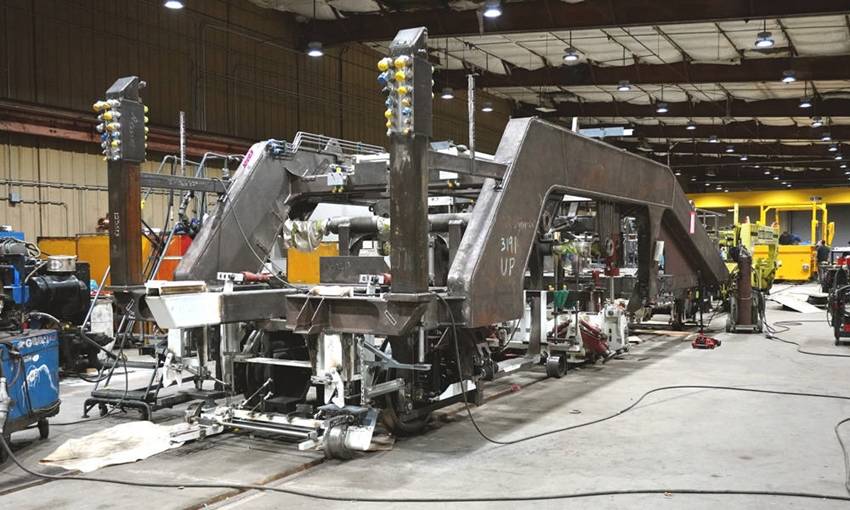 “Once we laid out a part on a frame, we would actually take a picture of it,” says Stark. “That could then be displayed with a reference point. So, we'd have the dimensions and we would write the part number on the part. But it turned out to be a very manual process; the welders and fitters doing the layout still had to have the mobile device with them and we were still relying on somebody using a tape measure and holding a part in place while they tack-welded it. Even though it was an improvement, we still weren't where we needed to be.”

Document control was also quite time consuming. The PAC team continued to improve their processes. 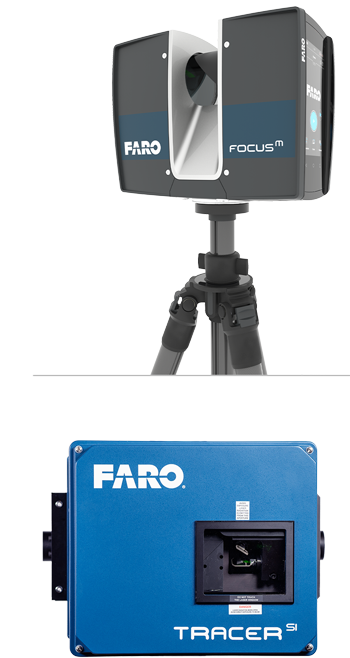 “We continued exploring ways we could increase our efficiencies and improve our quality control. We decided that laser projection technology could be a good solution,” says Stark. “If we could project onto the frame where all these individual pieces went, it might improve our consistency from one machine to the next, and also help us standardize multiple phases of the build.”

The Plasser team invested in the FARO FocusM 70 Laser Scanner and a FARO TracerSI Laser Projector.

“We decided that for the first machine frame of a type that we build, we would continue to use our hand layout process,” explains Stark. “Then we could scan that as a complete model with the FocusM and update our CAD files with the scan data. The CAD files are then used to create projector files, to allow the TracerSI to project component locations onto the next frame of the model that we build. We're doing a complete scan of everything we build right now so we can start developing a library.” 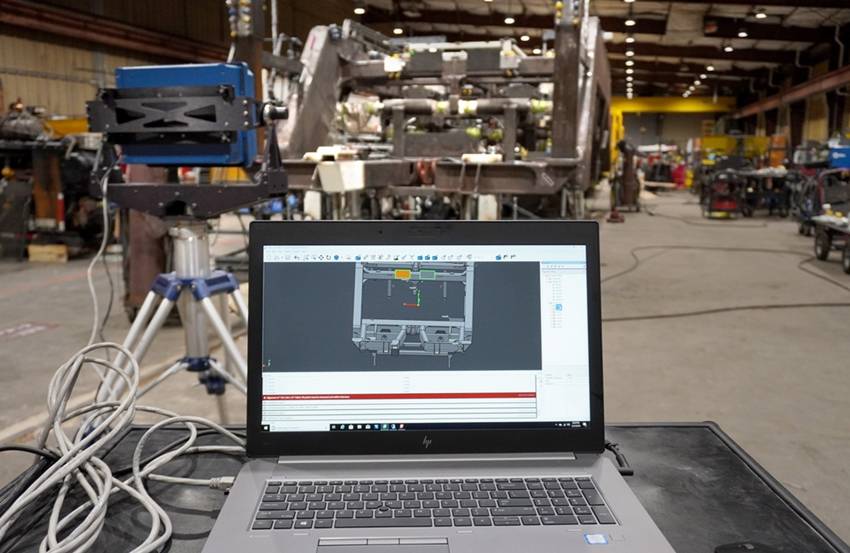 “It helps tremendously to capture the location of components that aren't necessarily critical to the engineering side of design,” explains Dozier. “But there are a lot of cable ways, protective and support plates that, although not critical in the engineering design, are tremendously important for the actual build of the machine. Once we scan and capture that information and update the engineering documentation to include the component names and locations, we can update and easily project these items onto the machine frames as we're building them.”

The benefits of laser projection were significant and became the new best practice.

“Before we had this set-up, we could easily have a half a dozen or more people doing the layout work,” admits Stark. “Now, we have one person laying out and tack welding components according to the projection, and another person coming behind them doing the finish weld. We cut approximately fifty percent off the time for the layout process.”

“By having the level of detail that the scanner provides we're able to pre-make all the weld plates,” says Stark. “Since we have 100% of component information captured, our bill of material is now 100% accurate. We can pre-make all the different components and weld plates to have them ready to attach to the frame.”

To gather and document component information on an entire machine could take four weeks when done by hand. With our FARO equipment, it now takes two days to capture the same information.
Anthony Dozier
Mechanical design engineer and mechanical liaison engineer, Plasser American

The Plasser team discovered that the TracerSI could be useful as an inspection tool as well as an assembly tool. The unexpected benefit helps Plasser to minimize rework. They use the TracerSI to perform inspection throughout key steps of the manufacturing process in two ways: First, as the TracerSI projects onto the as-built assembly, the projector lines provide a method of visual assembly verification. Second, the TracerSI is more than just a Laser Projector – it is the only Imaging Laser Projector on the market, and offers IPV (In-Process Verification). Once the components are welded onto the frame, the TracerSI scans (images) the surface at high resolution and detects errors in real time. It is able to detect misplaced parts, missing parts, and foreign object debris.

In addition, the imaging capabilities of the TracerSI allow Plasser to perform targetless, feature-based alignment. Other Laser Projectors require retroreflectors to be used to allow the projector to be properly aligned with the work surface. The use of retroreflectors requires extra steps. With the TracerSI, the actual features such as holes or edges of the work surface can be used instead of (or in addition to) retroreflectors to save time and effort. “Plasser manufactures massive machines and in many locations on the frame, we aren’t able to use a defined point to place a retro target. In many instances, our best options for alignment are hole patterns or smaller structural frame members, and that’s where targetless alignment has been beneficial,” added Dozier.


“We’ve seen a significant drop in rework,” says Stark. “It’s easy to make a mistake when you’re placing hundreds of pieces on a single frame. If you don’t catch the mistake until the frame is in the assembly stage, the level of rework can be multiplied several times. You may have to undo and redo wiring, for example, and then repaint the area after reworking it.”