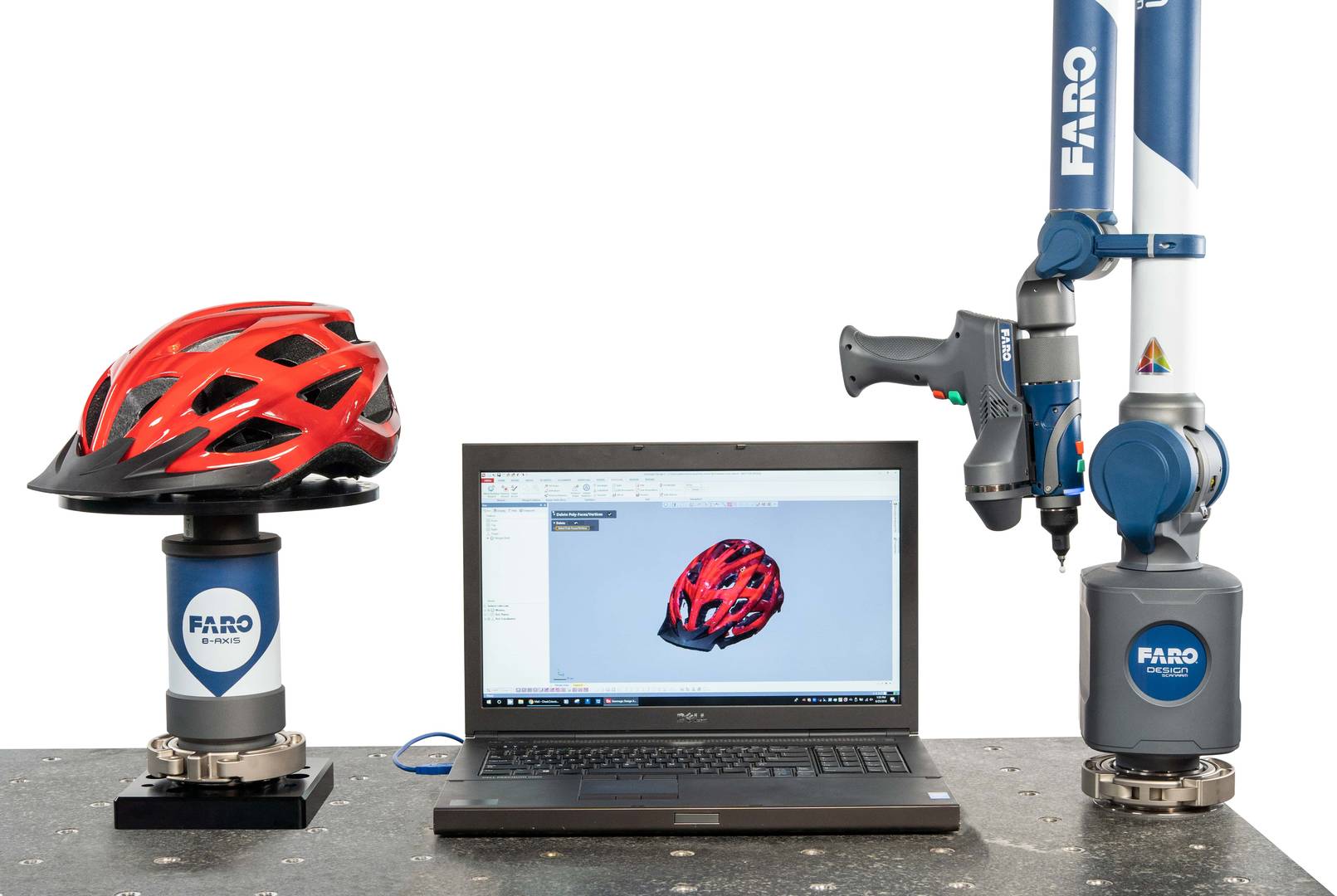 This article was originally posted on engineering.com on January 17, 2019.

In 1939, moviegoers were surprised and delighted to see moving pictures shown not in grayscale, but in resplendent color. In 2018, users of 3D scanners can experience that same thrill. Scanning hardware manufacturer FARO® Technologies' latest product, the PRIZM™ Laser Line Probe, captures not just an object’s geometry, but its color and texture as well.

Though the PRIZM isn’t FARO’s first foray into color scanning, it’s the company’s first high-resolution color scanner. PRIZM captures 30 bits of color data (10 bits per R, G and B channel) at a rate of 240,000 points per second. Combined with an accuracy of up to 75 microns, the probe offers an incredibly faithful representation of the target object.

The PRIZM Laser Line Probe is fixed to the end of FARO’s new 8-Axis FaroArm® or ScanArm (see the image above), which gives users an extra degree of freedom when scanning. The so-called eighth axis refers to a rotary encoder stage connected to the arm. Essentially, it’s a spinning stage on which users place the object to be scanned. This means users can simply rotate the calibrated stage to scan different sides of an object, rather than needing to reposition it manually. It’s a quick and clean workflow, and complements the colorful innovation of the PRIZM.

“We’re not sacrificing much of our resolution to get the color output,” said Chad Crisostomo, technical product manager at FARO. “When we started in the Laser Line Probe business, everything was monochromatic. It was strictly X, Y, Z information, and now we’re integrating color into it.”

To begin a scan, users first must calibrate the rotary stage by tracing the rim twice with the probe. From there, it’s point-and-shoot: put the object on the stage (make sure it’s a colorful one!) and “paint” it with the PRIZM Laser Line Probe, spinning the stage to capture all angles. A small object like a coffee mug can be scanned in less than a minute.

Users can monitor the progress of their scan with scanning-specific software, such as 3D Systems’ Geomagic Design X, one program that can be bundled with the scanner. As you rotate the stage while scanning, your point cloud will rotate accordingly in Design X. Other applications can also be used to monitor and export the scanned data: FARO CAM2, InnovMetric PolyWorks and Geomagic Control X, to name a few. 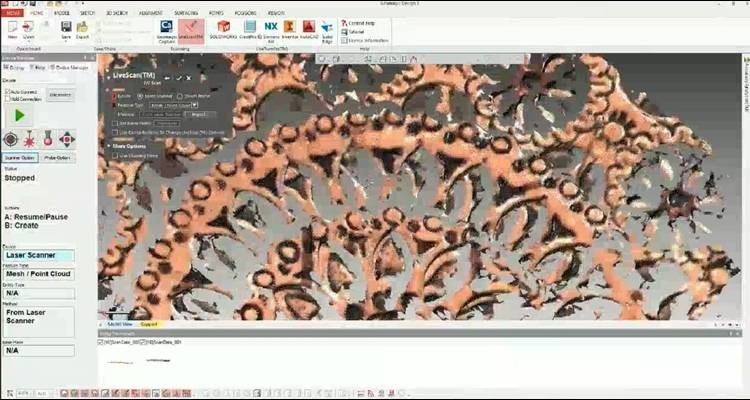 Partial scan of the fine details on a carved wooden box, shown in Geomagic Design X.

The ability to scan in color isn’t just a gimmick. Color offers several powerful advantages for reverse engineering and other scanning applications. At the top of this list is the fact that color and texture can easily distinguish between different materials in a scanned object.

“Whenever you talk about trying to reverse engineer something from the real world, most often today you have multiple materials in your objects,” explained Ken Steffey, director of Product Management at FARO. “One example we can scan is a hand drill. And the hand drill will have different pieces of plastic and metal and overmolded rubber, which all need to be understood if you’re going to reverse engineer it properly. Without color, you’re trying to refer to a photo reference or have the object beside you to understand which part of the scan relates to which material.”

For an illustration of this concept, look at the picture below. It shows a scanned point cloud of the handle of a FARO scanner. With color data turned off, the object appears to be constructed of a single piece of plastic. 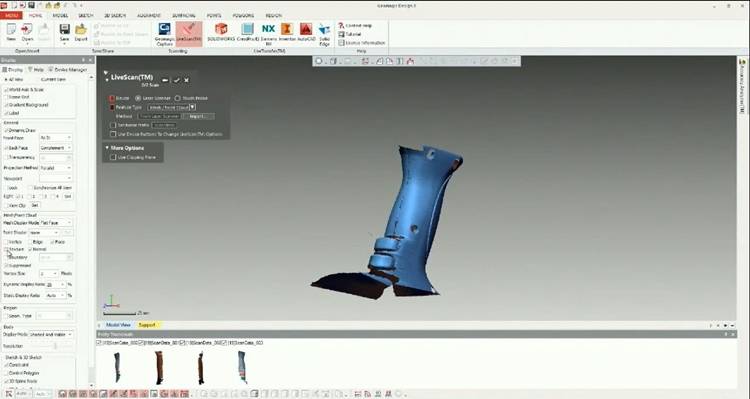 A FARO handle scanned without the use of color.

However, as soon as color data is turned on, it becomes clear that the handle is made of multiple pieces: 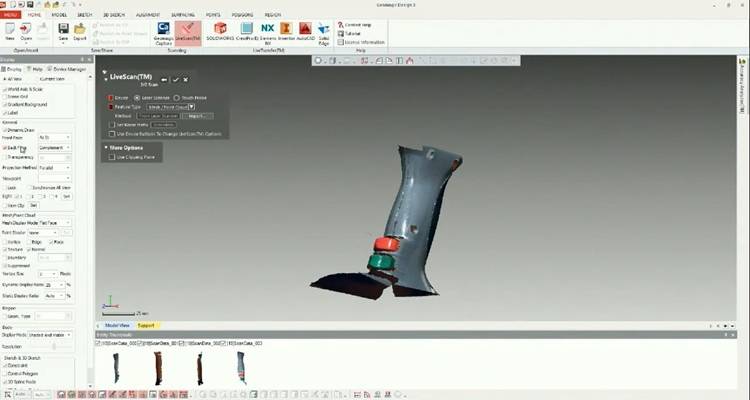 “The other area where we see a lot of need for [color scanning] is in the automotive aftermarket. And in that area, you have a lot of parts and components. You’ll have hoses, wires, clamps and all kinds of different pieces and parts that, in a 3D point cloud, all look exactly the same. So, you can’t tell what’s what and where one thing starts and stops. All of a sudden, you scan it in color and it becomes very, very clear that this is a clamp, this is a hose, this is a bracket, this one’s metal, this one’s plastic—things like that. So, imagine anything that a customer’s trying to do for reverse engineering, all of a sudden it lets you see where the different pieces of your assembly are really clearly,” Steffey said.

In other applications, the advantages of color scanning are more apparent still. In the world of GLAM (galleries, libraries, archives, and museums), 3D scanners are used for historical and scientific preservation. Since most real-world objects are already…well, in color, it only makes sense to try and preserve that color. Would a grayscale version of The Starry Night be just as alluring? Almost certainly not. 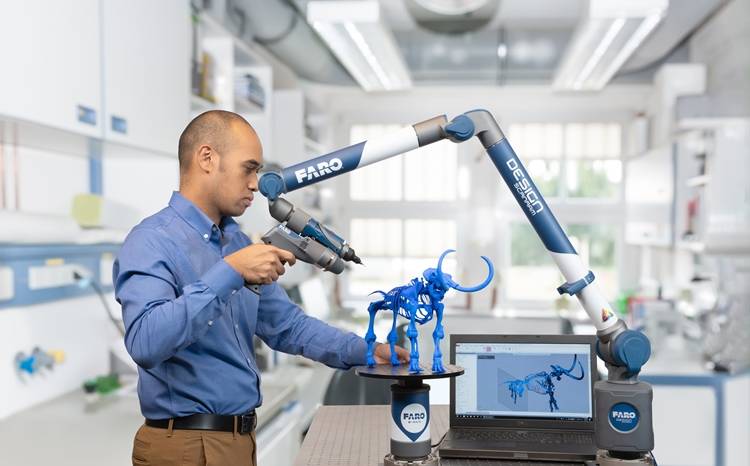 For those experienced with using 3D scanning tools, the FARO 8-Axis Design ScanArm and PRIZM Laser Line Probe will be intuitive to pick up and use. For novices, the learning curve may be about half a day, according to Steffey. Add another three to five days to learn the ropes of the software, and you should be ready to begin reverse engineering.

“When you think about the time savings, if you try to use traditional hand tools to reverse engineer some of these parts, you could easily spend a week trying to reverse engineer it,” Steffey said. “Once you learn these tools, it’s a few hours’ operation. So, the time invested is well worth it.”

The PRIZM Laser Line Probe further reduces complexity by offering a single process workflow—scan the object once, and all the details, colors included, are exactly where they need to be. It’s a turnkey solution for high resolution color data, according to Crisostomo.

Just as 1939’s The Wizard of Oz is remembered for being one of the first movies to utilize color, so too might your next engineering project benefit from the advantages of color scanning. Click here to learn more about the FARO PRIZM Laser Line Probe.

FARO Technologies had no editorial input to this post. Unless otherwise stated, all opinions are mine. —Michael Alba