Few accomplishments of human ingenuity and ambition in recent history captured our collective attention as completely as when we took our first steps on the moon, 50 years ago this year. People can recall exactly where they were, and how they felt, when they watched Neil Armstrong descend the ladder to step onto the lunar surface on July 21, 1969. 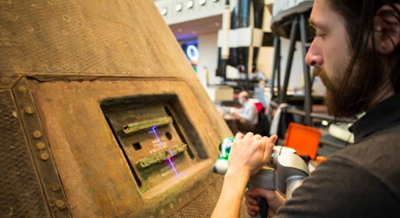 Using a FARO® ScanArm, the Smithsonian Office of 3D Digitization carefully scanned sections of the interior and exterior of the Columbia. Ultimately, technicians used seven different 3D scanning techniques. They uploaded the data to their partner Autodesk to render a completely immersive 3D model.

The results were unprecedented, in part because nobody had ever seen many of the details before. Says Diane Zorich, Director of the Smithsonian’s Digitization Program Office of the module, “You can’t go inside. Even the [museum] curator isn’t allowed. So, until we scanned inside, nobody really understood the complexity of the interior.”

The high-quality 3D scans revealed some surprises. As it turns out the astronauts engaged in some scientific graffiti. Technicians discovered calculations, notes… even an ode to the Columbia penned by Collins: "The best ship to come down the line."

The opportunity to examine such an important artifact in American history reveals a treasure trove of educational and research information. It literally places a viewer into another time in history.
Imagine a teenager living in 2019 immersed in an environment where everything is analog and beginning to understand the capacity for humanity to propel themselves further than we thought possible, and then look ahead to ask what’s next. 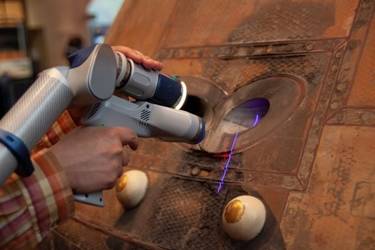 Scanning the command module is just one example of how emerging 3D technology is enabling museums to provide a different kind of experience for virtual visitors. Now, people from almost anywhere can experience and learn from history on their terms. Visitors to the Apollo 11 site can even download 3D print-ready models to create their own capsules, study the raw data to understand how the visualizations were developed, or go inside the module through VR-ready downloads.

There’s no question that 3D scanning technology is a valuable tool for museums. It makes scanned artifacts accessible to a variety of audiences in ways that wouldn’t be possible if they were only viewable behind a barrier.

Want to see how they scanned the Columbia? Watch the video!