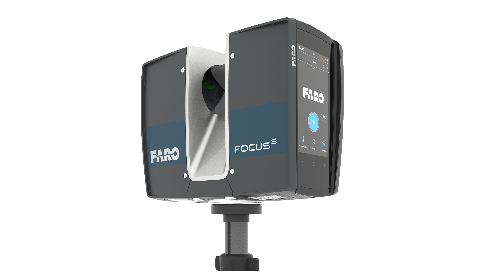 When complex or large environments need to be documented, Laser Scanners provide a practical and economical solution.

So, how do they accomplish all of that so quickly? The Laser Scanner emits a beam of infrared laser light onto a rotating mirror that effectively paints the surrounding environment with light. The scanner head rotates, sweeping the laser across the object or area. Objects in the path of the laser reflect the beam back to the scanner, providing the geometry that is interpreted into 3D data. In addition to the distance measurement, Laser Scanners also capture measurements on the horizontal and vertical planes, providing a full scope of measurement data.

Laser Scanners are versatile, easy to use and move, and accurate, making them an ideal tool for many applications and industries:

Insurance: Laser Scanners are used to document the actual state of a piece of property at a point in time, helpful for setting a baseline for value and obligation, as well as documenting losses with vehicles, damaged properties or products.

Oil & gas: Laser scanning is well-equipped to assist in engineering, maintenance and planning on oil platforms and in refineries. They are also highly useful in documenting complex piping structures to avoid installation issues or errors.

Heritage & historical preservation: Laser scanning can document the complex geometries of existing buildings in order to study, preserve or restore them.

Site surveying: Laser Scanners can be used to make volume calculations as well as topographic and as-built surveys.

In each application scenario, a Laser Scanner produces accurate results in less time and with fewer errors than other, more traditional methods. And in some cases, such as documenting crime and crash scenes, the time saved offers downstream benefits such as being able to open roadways to the public earlier. In applications that require outdoor work, Laser Scanners can document complex areas where inclement weather is a concern.